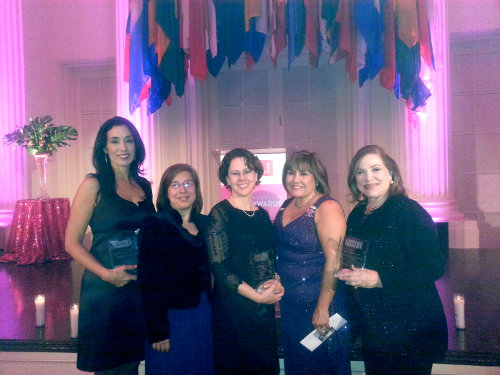 Since 1993, NHLI’s Mujer Awards have recognized the lifetime achievements of Hispanic women who have served their communities and acted with justice love, and the deepest of pride in their culture.

Purpose | To honor the outstanding commitment and contributions made by Hispanic women to their communities and to bring national attention to the recipient’s work.

Eligibility Criteria | The nominee is a living symbol of NHLI’s philosophy, creating positive global change and a pluralistic society through personal integrity and ethical leadership and has demonstrated the following characteristics:

Throughout her life, she has sustained a clear vision for ASME Section IX the future of the Hispanic community and her actions have consistently reflected that vision.

Undaunted by difficulties, she has been proceeded with faith in herself and her beliefs.

Through the years, she has evolved with the times and has maintained herself grounded in the present social, economic, and political environment.

She is collaborative leader who inspires and motivates others and gets the task accomplished. She relishes life by basic principles and abides her values.

She understands her personal power but shares it easily with those whose lives she has touched. She values life and demonstrates joy, kindness, calmness and inner peace.

She has empowered many over the years through her service.

She has acted with justice, love and the deepest of pride in her culture.

Her immensely popular, live, call-in talk show, “Doctora Isabel,” Monday-Friday, 12:00-2:00 pm (EST) is beamed coast to coast daily on the Spanish-language Univision America. This warm, thoughtful and charismatic doctor, with a motherly knack for listening and dispensing advice in a forthright manner, daily doles out expert opinions on a host of crucial issues ranging from parenting, marital relations, divorce, human sexuality, education and death and dying to addictions, co-dependency, teen rebelliousness and violence both in and out of the home. A true media phenomenon, she receives an average of 8,000 telephone call attempts per day.

Dr. Isabel’s captivating public persona belies a serious professional side that holds the secret to her enormous credibility. A noted psychologist, educator and domestic-violence specialist with three decades of experience in adolescent and family counseling, she aws standard has worked both in private practice and as a psychologist for the Miami-Dade County Public School System, the 4th largest in the country. There in the 70’s, she developed and implemented a model aggression control program, and ultimately came to chair its Psychological Services Department. Both the Florida and National Associations of School Psychologists have recognized Dr. Isabel as an expert on issues affecting Hispanic children and their parents. As a result of her work and effective approach to counseling, she is highly sought after as a frequent television guest and keynote speaker.

A mother of four and grandmother of eight, Dr. Isabel holds a doctorate degree in Education with a specialization in Early & Middle Adolescence. She also holds a post-graduate specialist degree in Psychology, and a Masters in Psychological Diagnosis. In addition, she has completed intensive specialty training in a variety of subjects, including sexual ASME Y14.5 intimacy disorders, at the world-renowned Masters & Johnson Institute; domestic violence, through The National Coalition against Violence and family grief & loss from Chloe Madanes.

In recent years, Dr. Isabel has also become a prolific author of culturally relevant, self-help books. She is currently completing her latest semi-autobiographical work titled, “Mujeres con Pantalones” (Women with Pants On) which will be published sometime in the summer of 2013 by Penguin Books. Her most recent work “Pensamientos: Palabras que Iluminan el Camino” was published in 2009 by Vintage Espanol.

“Los 7 Pasos Para Ser Más Feliz” (The Seven Steps to More Happiness) was released in October 2006, and its complementary notebook was published in July 2007. This publication is the fourth of a series of instructional books Dra. Isabel has written in the last 6 years. Her previous book “Los 7 Pasos Para el Éxito en la Vida” (The 7 steps for Being Successful in Life) published in November 2003, was a manual designed to help the Latin community accomplish their life’s objectives. In 2002 she published the very successful, “Los 7 Pasos Para el Éxito en el Amor” (The 7 Steps for Being Successful in Love) seeking to help Latin couples improve their romantic relationships by way of practical exercises, simple steps, and real-life examples. And in 2000, her landmark ¿Dónde Están Las Instrucciones Para Criar A Los Hijos?” (Where Are The Instructions For Raising Our Kids?) a best-selling parenting guide for raising happy, healthy and successful children.

She has also written two children’s self-help books with her son, Eric A. Vasallo titled, “La Cancion de Gabriela” and “Tu Si Puedes Gabriela” which were published in 2007-2008 by Harper Collins. These books dealt with the fear and challenges related to immigration from a latin american country to the United States and how to be the healthiest version of yourself through proper diet, exercise and familial participation.