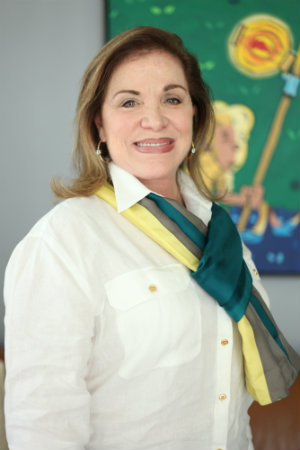 Dra. Isabel Gomez-Bassol, better known as “El Angel de la Radio” in Spanish-speaking households across the United States, has built a career as the first Latina psychologist to host a national talk show—providing a glimpse into the raw confessions, grievances, and fears of individuals who call in to Univision radio every day from 12-2 pm ET.

Though even the Obamas have called into her show as they hit the campaign trails, Dra. Isabel’s isn’t a political show. Yet the stories people have shared have made the radio icon “militant” about the psychological effects of failed policy and the importance of the Latino vote.

During the election season, Presente.org traveled to major cities and met with our members to discuss the issues that matter to them and that will shape our work in the next few months. Dra. Isabel was one of those interviews.

Presente.org: Why is voting so important to you?

Dra. Isabel: I arrived in this country a long time ago as an immigrant. I became a resident and then a citizen and as soon as I was able to have voting privilege, I took it. We have a privilege in this country to vote. However, at the same time that we have the right to vote, we have the right to be informed. I suggest that you find out who is this person that I’m voting for, what does that person represent.

Then after you decide what is good for you, you also have to be compassionate enough to know what is the best thing for the rest of the country. Because if we only think about what’s in it for me, you’re not acting in the way that the universal mind works—you have to think what’s the best for everybody, not just for you.

Speaking of your show, you’ve had a lot of interactions with DREAMers. Can you talk about that?

All through my career first as an educator, then as a psychologist, I have seen what happens to children who are in this country, by no wish of their own—they may have come here at 1 years of age, at 3 years of age—but they never feel wanted, they never feel that this is their country and at the same time this is the only country they know about. I have seen a lot of injustices committed through the years—all those 20 years that I worked in the school system. There were so many things that made me move to be more militant about the DREAM Act.

At the same time, I saw children that I just described get to high school, have an opportunity to go to college, and they would make better point averages than some young people who were born in this country with all the rights that were given to them. There is a resilience factor. It’s almost like I want to make it. But there are others who don’t feel wanted. And they go by the wayside.

What are the psychological effects?

A lot of children of Latinos and Hispanics because of that they develop anxiety disorders. Imagine that you’re going to school and you are expecting your mom to be home when you get there and they have been taken away. What do you feel inside of you if you already know that possibility ahead of time? How does that affect your life? These are people who are the future of America, that don’t know anything about their original countries.

I’ll give you an example. Mexico is having a lot of problems with people who have been returned to Mexico and they don’t speak the language, they don’t know the culture, and Mexico has a lot of accommodations to teach these children like we do here, bilingually. In fact, they’ve requested help from the United States in order to help these kids. And most of these kids don’t want to be there. And it has nothing to do with Mexico is bad. No, Mexico is not bad. It’s that the country that they know is the United States. And I think that with the DREAM Act at least we see the children that will be able to study and want to be successful in life and want to be successful in the United States—it is a tremendous gift that we have here in the United States. Whatever we invest in them is going to help us back.

Can I tell you a story in particular?

You know, I’ve been on the radio for over 16 years. And I travel all over this country doing seminars, meeting with people. And I remember one girl. She came to me and she was crying and she was 14. Her mother had just told her that she was an immigrant, that she did not have documented papers. And she said, “well, why should I continue going to school?” And I said, “go to school. Prepare yourself. What’s the worst that can happen? That you have to go back? Well at least you’ll go back with a title, with a  diploma, something better than what your parents brought here.”

So years went by and I completely forgot about her because I’ve done this speech several times. I met this girl in San Diego. And she said, “do you remember me?” And I had that connection. When I saw her I remembered. I said, “How are you doing?” She started to cry. She said, “I followed your advice. And I have a degree, a bachelor’s degree. I am cleaning houses.” And even though that’s a noble profession that we need, I saw the sadness in her heart. That she had studied, she had done everything right, and she still couldn’t work like a documented person of this country. For that girl, I have it so close to my heart. Anytime I speak about this, I must mention her. Her name is Susana.