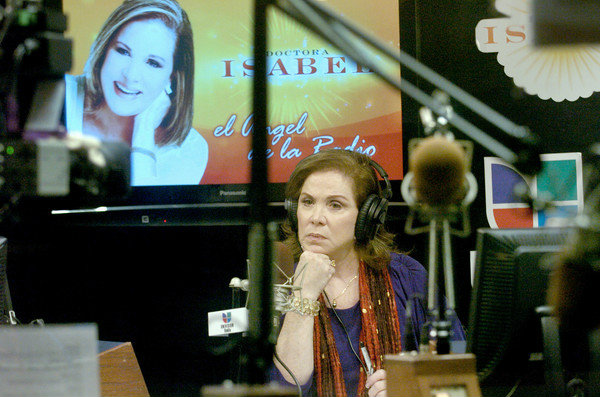 South Florida
‘La Doctora’ is in: Grandmother of 8 dispenses advice on the radio
By Johnny Diaz, Staff writer

“Doctora Isabel, this is your president.”

President Barack Obama called into the radio show of Isabel Gomez-Bassols, a name and voice best known as “la doctora” to thousands of listeners who want her daily advice on relationships and raising children.

The president wasn’t looking for advice, though. He called last summer to discuss education, immigration and health care with the chatty Cuban-born Miami radio psychologist, who translated his answers for her Spanish-language listeners.

“He answered everything that I asked. That is one of the great experiences that I have had on my program,” recalls Gomez-Bassols, a grandmother of eight and former science teacher who has carved a second act in dispensing advice like a favorite aunt.

Whether from the White House or the homes and cars of everyday Spanish speakers, the switchboard at Univision Radio’s Coral Gable studios lights up with callers looking for a sympathetic ear. She reaches more than 351,000 weekly listeners in 17 Hispanic markets, from Fort Lauderdale to San Francisco, covering 58 percent of the Hispanic population nationally. In the Fort Lauderdale-Miami market, the show has about 40,000 weekly listeners, according to radio ratings service Arbitron.

“My program is about daily life, the routine of life, or the obstacles of life. I give people a reality check,” she says in between calls recently. “Radio has a magic that you are not going to find anywhere else. It is that nobody knows who you are and they want to open up.”

What started out as a radio program 15 years ago has evolved into a multimedia mental health production. Gomez-Bassols appears on the Univision-owned Spanish-language broadcast network, Telefutura TV, on Wednesday mornings to answer viewers’ questions. The radio show is streamed so followers can see her laugh or cringe from behind the microphone. She answers questions on Facebook, too.

“She is very charismatic and engaging, which is harder to do on radio,” said Dolores Ines Casillas, a media professor at the University of California Santa Barbara, who compared Gomez-Bassols to a “Latina Dr. Phil” in bringing mental health to a broad audience. “She is also very sweet when you first call. She has less of a girlfriend approach and more of a caring aunt who wants to reach and help you kind of way.”

Gomez-Bassols never set out to be “la doctora.” She was a Miami science middle school teacher whose students would seek her advice afterschool for their personal problems. With her principal’s encouragement, she pursued counseling.

“I wanted to know why Johnny learns and Mary cannot learn. That’s when I started having this passion for diagnosis for psychology, for learning more about it,” Gomez-Bassols said. That led her to earning a doctorate in education with a specialization in early and middle adolescence, working with troubled youths.

She became head of psychological services for alternative education for Miami-Dade County Public Schools, and as word spread about her easygoing people skills, she became a regular guest on Spanish TV shows. Radio then came calling.

“Dra. Isabel’s candor and thought-provoking advice entices Hispanic listeners from across the county,” Jose Valle, president of Univision Radio, said in a statement. “Her show truly showcases the spirit of our community — to share, guide and protect. The show’s success is testament to her deep connection with Hispanic audiences.”

Inquiries run the gamut and geography: Luz, 56, of Fort Lauderdale, said her friend talked badly about her husband. Delia, 46, of New Jersey, said she often felt alone and depressed. Angel in Chicago needed guidance after catching his fiancee talking to an ex-boyfriend.

The calls mirror society: parents with children who are cyber-bullied; how social media affects couples.

Lately, she said, she’s seen “more men willing to say, ‘I am sad, how can I fix this?’ I have seen an increase of humility in that sense, a re-ownership of their problems.”

On Thursdays, the show’s theme is sex. This afternoon’s topic: whether people should gossip about their partner’s sex lives with friends. Maria, 40, from New York, was on the line.

“My friends and family talked badly about me. I didn’t accept that so I separated from them,” said Maria, her voice shaky.

In her soothing voice, Gomez-Bassols told her, “It still hurts you. I can hear it in your voice.”

“I feel your pain because I know you had to separate from your family because they were gossipers and that hurts a lot. I always say that one should choose friends who can be your family. Maria, don’t let this bring you down. If they are gossipers, they are people with bad intentions. You don’t need this in your life.”

As Gomez-Bassols empowered listeners with “you have the power within to do anything you want to do in life…perseverance is the key,” producers stood by with numbers to connect callers with local support groups.

“Some of the calls that I receive can be very difficult. I have to put it away, processing it one way or the other,” said Gomez-Bassols, whose coping mechanisms include daily meditation. She says family is her best medicine. “Being with my family, my grandkids is how I recharge,” Gomez-Bassols says. “When I am with them, I can be the grandma, playing with them and seeing life through their eyes.”

They’re scattered throughout Miami, Atlanta and Boston. When she visits them, she sometimes brings special equipment that allows her to broadcast the shows remotely.

“Some people say to me, ‘Are you going to retire?’ Retire to what? I am proud of being a productive, functional and lively grandma,” she says. “I love life and what I am doing.”

Dr. Isabel Gomez-Bassols’ show can be heard in Broward and Miami-Dade counties from 1-3 p.m. weekdays on WQBA, 1140 AM. For more information, go to doctoraisabel.net (non-Spanish speakers can click on “English” on the top righthand corner). She also can be reached through facebook.com/doctora.isabel.