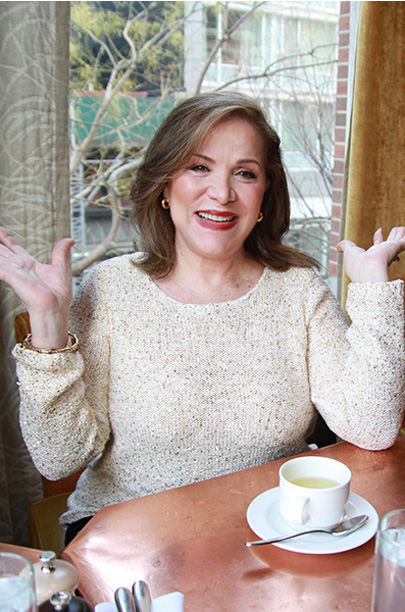 Dr. Isabel Gómez-Bassols, better known to her legions of fans as “Dr. Isabel, the Angel of Radio,” is the nation’s first Hispanic radio psychologist. The immensely popular host of the radio show of the same name hosts her advice show, live, every Thursday, from 12: 00- 1:00 pm (ET – Eastern Time), through La La Red Hispana. This warm, sensitive and charismatic doctor, with an almost motherly ability to listen to others and offer good advice directly, issues expert opinions daily on a range of crucial topics ranging from parenting, marital relationships, divorce, human sexuality and education to how to deal with death, addictions, dependency, youth rebellion and violence, both inside and outside the home. A media phenomenon, the doctor has received an average of 8,000 phone call attempts per day. The captivating personality of Dr. Isabel is supported by a serious professional record, which contains the secret of her vast credibility. Renowned psychologist, pedagogue and specialist in domestic violence, with three decades of experience as a family and adolescent counselor, she has worked as a private psychologist and for the Miami-Dade County Public School System, the fourth largest in the country. There, in the 1970s, she developed and launched a model program to control aggression. Over time she came to chair its Department of Psychological Services. Both the Florida Association of School Psychologists and the National Association have recognized Dr. Isabel as an expert on issues affecting Hispanic children and their parents. As a result of her work, as well as her effective method of practicing counseling, she is highly sought after as a guest on various television shows, on which she appears frequently, and as a public speaker. A mother of four and a grandmother of eight, Dr. Isabel has a doctorate in Pedagogy with a specialization in Adolescence in the early and middle years. Likewise, she has a postgraduate degree in psychology specialist and a master’s degree in psychological diagnostics. In addition, she has completed intensive specialized training in a variety of fields, including sexual intimacy disorders, conducted at the world-renowned Masters & Johnson Institute; domestic violence, through The National Coalition against Violence; and mourning and family loss, in Chloe Madanes. In recent years, Dr. Isabel has become a prolific author of culturally relevant self-help books. Her latest semi-autobiographical work, Una Mujer Verdadera, was published in August 2016 and is available on Amazon.com. The 7 Steps to Be Happier was launched in October 2006, and its companion notebook was published in July 2007. This publication is the fourth in a series of instructional books Dra. Isabel has written in the last 6 years. Her previous book The 7 Steps to Success in Life, published in November 2003, was a manual designed to help the Latino community achieve their life goals. In 2002 the very successful The 7 Steps to Success in Love was published, which aims to help Latino couples improve their love relationships through practical exercises, simple steps and real life examples. And in 2000, her landmark Where Are The Instructions To Raise The Children?. Which is a guide to raising happy, healthy and successful children. She has also written two children’s self-help books with her son, Eric A. Vasallo entitled, La Canción de Gabriela and Tu Si Podemos Gabriela, which were published in 2007-2008 by Rayo Libros-Harper Collins. These books deal with fear and problems related to immigration from a Latin American country to the United States and how to be the healthiest version of yourself through proper diet, exercise, and family involvement.